Access to the church is allowed thanks to the two staircases leading to the churchyard: they recall the fact that the church represents the holy mountain, the place where heaven and earth touch, where man meets God. The churchyard is a space intermediate, heir of the pronaos of the ancient temples where the non-baptized were standing: today it represents the link between the church and the city. The community welcomes with sympathy those who stop for a rest or waiting to enter into the holy place. Passing through the majestic portal we go in a different space: by making memory of baptism we pass through Christ himself who says of himself: “I am the door” (Jn 10: 7). 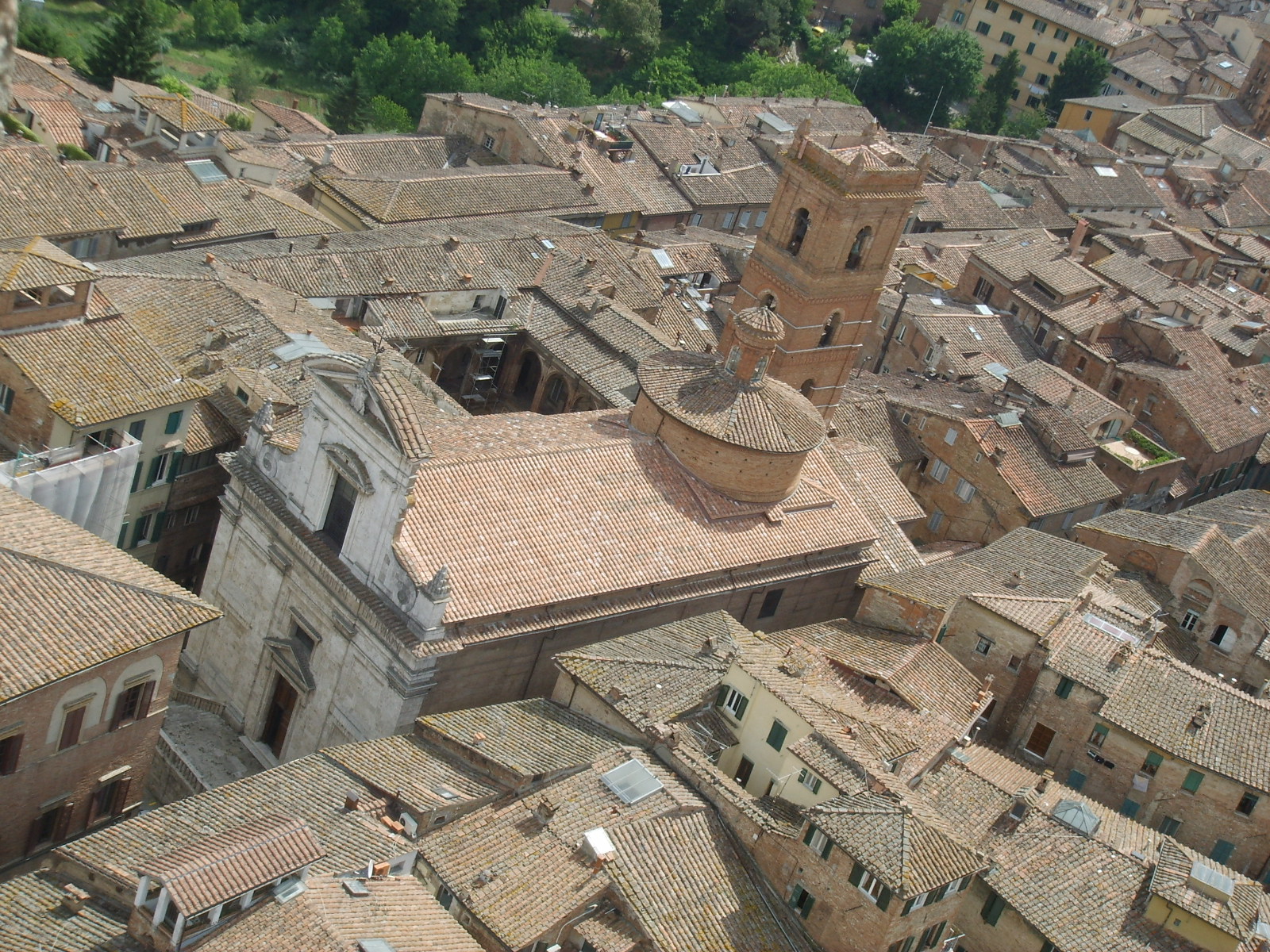 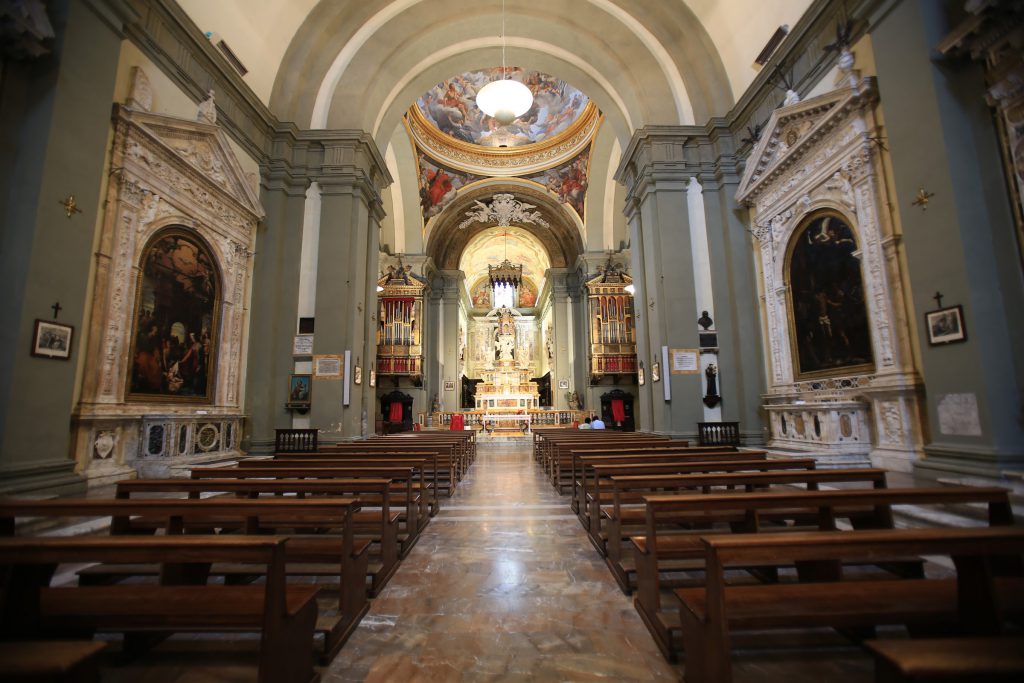 Our church has a single nave with side altars leaning against the walls, a little protruding transept and a raised presbytery where the altar and the choir are located. The nave represents the reality of the church, the mystical body of Christ: Christians gather here as in their common home. The monumental altar is the center to which the whole building is oriented. In the lower level we can see the table where the Eucharistic sacrifice is offered and at the top stands a magnificent ciborium surrounded by angels that still today hosts the Blessed Sacrament during the holy week. The steps leading to the table allude to the elevated position of Golgotha ​​where the sacrifice of Christ was consummated. This artifact is due to the patronage of the aristocratic family De ‘Vecchi who in the XVII century committed the construction of the stonemasons and Sienese sculptors Giuseppe and Giovanni Mazzuoli, to whom are also due the statues of the Augustinian saint Tommaso da Villanova (1486-1555) on altar of the right transept and of the Madonna with the child on the altar of the left one. To Bartolomeo Mazzuoli we must instead the sepulchral monuments of Camillo and Virgilio De ‘Vecchi over the two doors that overlook the presbytery. Above the altar hangs a golden wooden canopy, a sign of respect for the Blessed Sacrament kept lower.

On the presbytery, but behind the altar, there is a wooden chancel, used by the religious who in the past officiated the church for the common prayer. At the center of the chancel there is a large lectern on which the liturgical books were placed, which could be read by those who sat in the benches. In a niche in the apse wall is offered to the veneration of the faithful the wooden statue (of the ‘500) of St. Nicholas of Tolentino (1245-1305), an Augustinian saint, memory of the religious who prayed in San Martino in the past centuries. On the higher layer there is the stained glass window, perhaps by Pastorino, which dates back to the 16th century depicting San Martino and the poor man, the only reference in the whole church to the saint to whom it is dedicated. It captures the salient moment of the life of Martin, when faced with the poor nude he meets in front of the city of Amiens, he, not even Christian, splits his cloak in two to give half of it to the wretch he faces (Sulpicius Severus, Vita Martini, 3, 1-6). 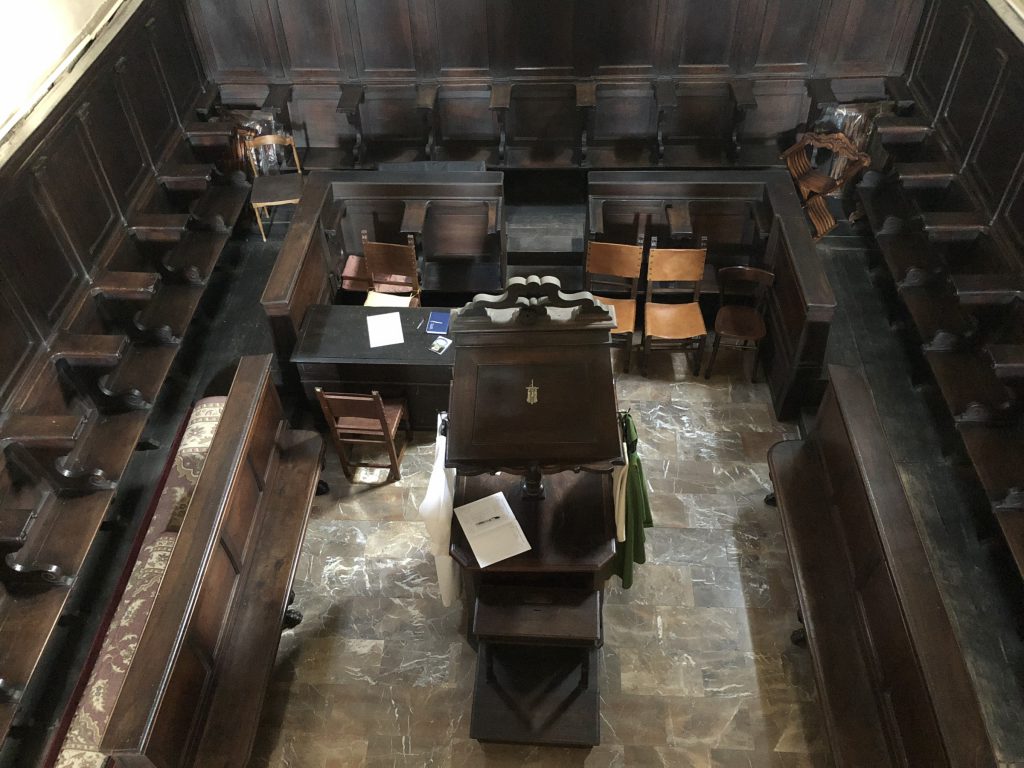 Continuing the visit of the nave, you will find on the two sides different altars that in the past enjoyed the patronage of noble families who often took care of the construction and maintenance through prebends that helped the regular or secular clergy that served the church to stay. It was also a form to ensure a close link between church and neighboring territory: families like the De ‘Vecchi or the Gori took care of the church where their members had been baptized, married or buried. While the form and the decoration of the altars have their own coherence, the iconographic project does not show a recognizable line, often due to the devotions of the clients or to other occasional reasons. On the first altar on the right we can venerate a reproduction of the Madonna and Child by Naddo Ceccarelli (first half of ‘300) inside a painting attributed to Crescenzio Gambarelli, on the second – of patron Gori – we have the canvas depicting the Circumcision of Jesus ( 1636 c.ca) due to the great mannerist Guido Reni. On the third altar, a work by Guercino, the Martyrdom of San Bartolomeo (1637), unfortunately not readable. On the left side of the nave, in the first altar, the Glory of St. Ivone by Raffaello Vanni (first half of the 17th century), in the niche of the second a polychrome crucifixion with wooden statues between the 1400s and 1500s and on the third an authentic masterpiece of Domenico Beccafumi which depicts the Nativity of Jesus (1524 c.ca).

In the two counter-façades we find on the left a panel of Giovanni di Lorenzo Cini representing the Madonna that protects Siena (commissioned by the Municipality in 1528) while below the famous battle of Camollia (1526), ​​and on the right a painting of the Quaranta Martiri di Ilario Casolani (first half of the 1600s).

In spite of a certain randomness of the subjects it is not difficult to recognize that in the lower part of the temple the episodes of the life of Christ and of Mary are depicted, as well as the images of the saints who followed and imitated Christ in their mortal life. Crossing the church it is possible to follow a true Christological itinerary of faith. This kind of pilgrimage can begin in front of the Nativity table by Domenico Beccafumi (about 1524). 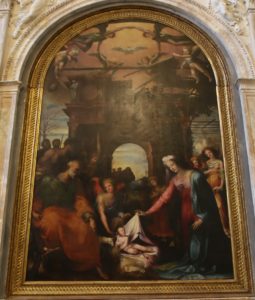 At the center of this work we contemplate the mystery of the incarnation of the Verb. At the top the arch of triumph partly in ruins symbolizes the overcoming of paganism with the consequent beginning of a new era in the history of the world, inaugurated by the birth of the divine child. The angelic choir indicates that it is a celestial event: the child, apparently like all the other infants, hides a further identity, the divine one. The dove, sign of the Holy Spirit, alludes to the outpouring of grace that involves every event of the life of Christ. The scene below, at the center of the representation, shows us Mary in the act of unveiling the child who is thus shown to the adoring sight of the bystanders: Joseph and the shepherds. The hands of different characters – including another angel – converge in indicating the infant as the center, not only of the scene told, but of the history of the world and of every believer. The almost dangerous pylons that hardly suggest the presence of a shelter are a sign of the precariousness of the human condition that Christ has embraced with the incarnation and that each of us shares. 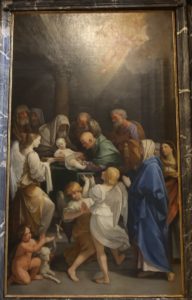 The work of Guido Reni representing the circumcision of Jesus (1636) marks the second stage of our ideal itinerary in the footsteps of Jesus.

The Gospel episode narrated by St. Luke (Lk 2: 21-38) is re-proposed by the artist with remarkable accuracy of particulars. The presence of classical architectural elements suggest the background of the Temple of Jerusalem as the setting of the episode. At the center the child surrounded by priests of the Temple, including one who is about to proceed to circumcision while the child turns his gaze elsewhere, almost presaging the impending torment. Below, an angel holds a saucer to collect the flap of meat amputated by the priest, still part of the true flesh of the Savior. Mary and Joseph stand on the right side of the scene with a female figure carrying doves in a basket to signify the fulfillment of the whole law. At the bottom left a lamb embraced by Saint John carrying a cross suggests the link of all the mysteries of the life of Christ that lead and prelude to the Cross that constitutes its peak and unveiling. 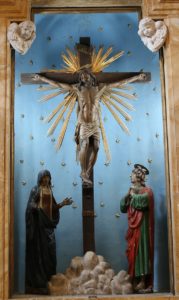 The mystery of salvation obtained by the sacrifice of Christ on the cross is represented in the polychrome wooden group by an anonymous fifteenth-century artist who is inside a niche in this altar. The representation does not allude to theological reasons, but it is such as to emotionally touch the bystanders, and in fact the crucifix of San Martino until a few decades ago was the center of an annual festival of the most popular in the city. A niche painted in blue, with golden stars attached, surrounds and circumscribes the scene: it is the firmament that in its indeterminacy suggests the universal value of the crucifixion. At the center is the Christ patiens nailed to the cross with a painful and sweet expression at the same time that transmits love for all humanity beside the torment. On the sides, below, Mary on the right facing the nave, as if to embrace the children Jesus gave her from the cross, and on the left, John, the beloved disciple, with the face oriented to Jesus and the expression heartfelt. Under the base of the cross the stones representing Calvary.

On the left façade there is a painting dating back to 1528 by Giovanni di Lorenzo Cini representing the protection of Mary over the city during the battle of Camollia (1526). It is the last stage of our Christological itinerary. It represents the time of the church, enclosed between the incarnation and the last coming of Christ in glory. It is our evo, in which the continuation of Christ in history, his Mystical Body, the Church, lives, rejoices and suffers, under the maternal protection of Mary, to whom Christ himself on the cross has entrusted it. The mantle of Our Lady, supported by angels spread over the entire city, protects those who fight the good battle of faith. Above the angelic hosts of Paradise recall the celestial city, our last destination, while below the battle of Camollia takes place in which there was an amazing victory of the Sienese against overpowering Florentine and Papal forces, traditionally read as further evidence of the power of the entrustment of the city to Mary. 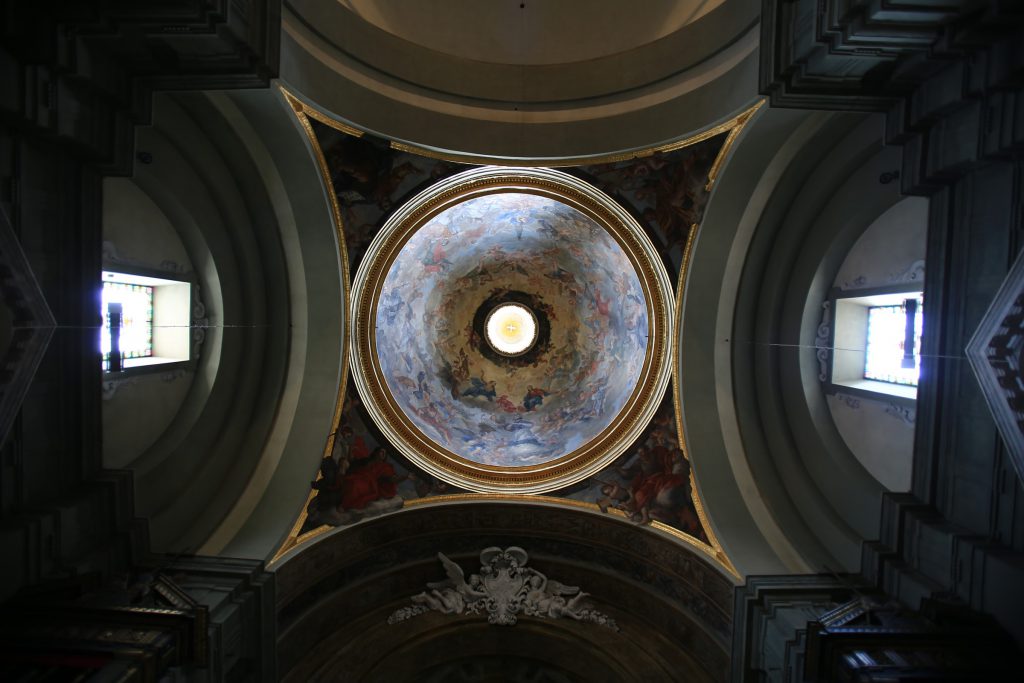 The dome above the transept alludes to the glory of the heavens and is decorated with various allegories due to Annibale Mazzuoli who frescoed them at the end of the 1600s. The presence of a dome refers to the nature of the temple of microcosm erected between the two spaces of the earth and the sky, in order to connect them. This union is due theologically to the incarnation of the Word, a true bridge between God and man, the way for which creatures can go back to the Father through the mediation of the Son. Artistically, the whole iconography of Jesus, of Mary and of the saints brings us back to this reality.

The chapel of the Agazzari

On the left side of the altar opens a door that leads into a chapel, called the Agazzari, whose decoration dates back to 1300, when the church was officiated by a community of Canonici Regolari of San Frediano in Lucca. Probably this environment was born as a funerary chapel of the noble Agazzari family, which would seem to be witnessed by the presence of a representation of Christ the Judge on the great gothic monofora. The frescoes that decorate the chapel testify to the influence of Duccio da Boninsegna in at least three generations of painters later on him. Going from the great church to this high, but collected environment, produces almost a shock, a backward leap from the Baroque to the Gothic, testifying that in the various ages our temple has been the object of care to adapt it to different needs of taste and worship . 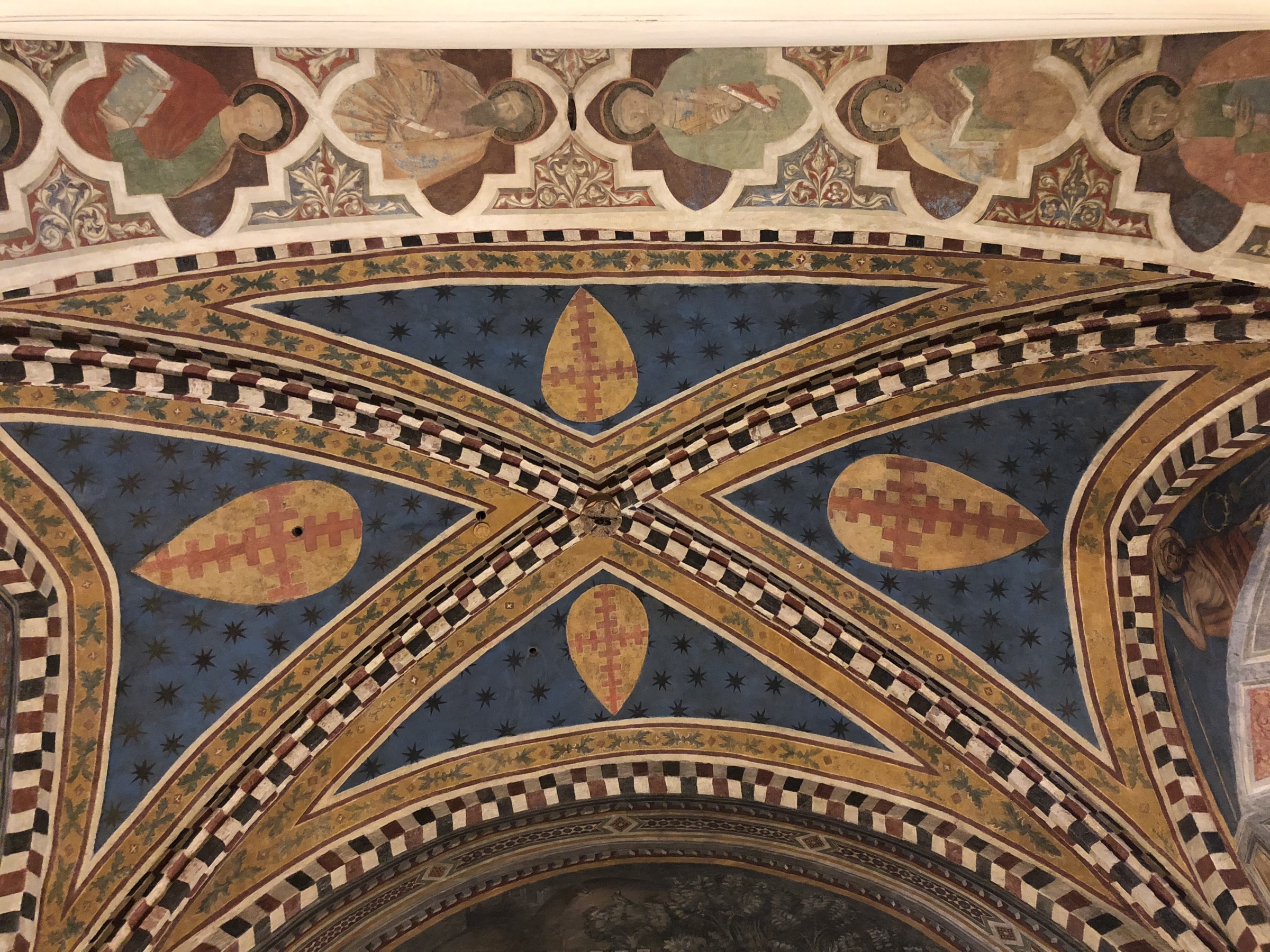